SACS PUSH BISHOPS TO THE BRINK 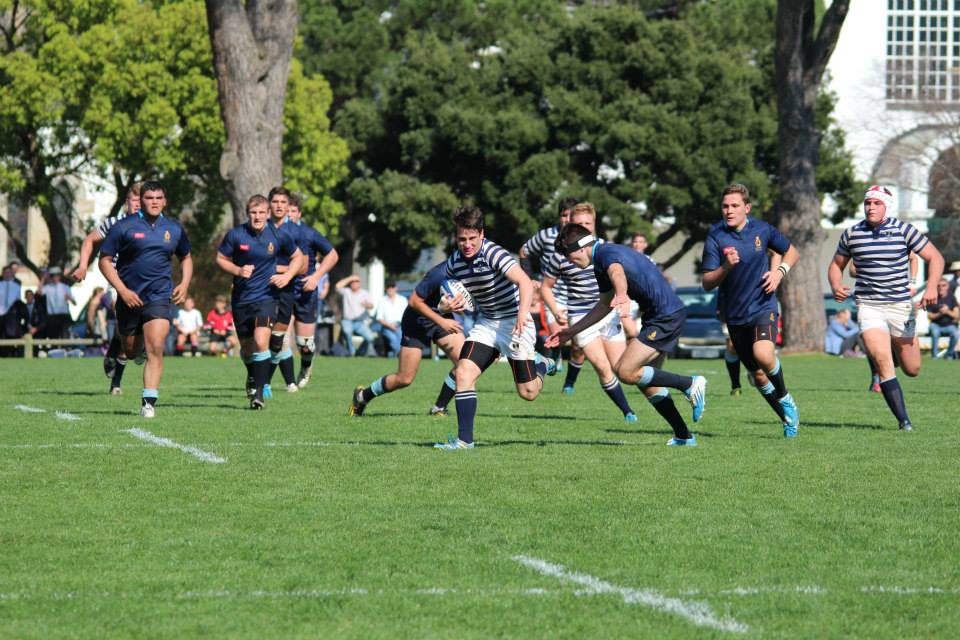 In what is the oldest schoolboy derby in South Africa the South African College High School (SACS) 1stXV came close to making themselves living legends by pushing Diocesan College (Bishops) to the limit at the Piley Rees Field in Rondebosch on Saturday.

SACS had been comprehensively beaten by Bishops in the first round game at SACS and trailed 19-nil early in the second half only to get within a whisker of drawing level with their hosts with fifteen minutes to play. A draw or a win would surely have been one of the greatest turnarounds in rugby history. It was not meant to be though and Bishops scored from a tighthead with five minutes to go and ran out 26-12 winners.

After another week of miserable weather which saw both teams battling with players being unable to train due to illness the weather cleared up and the game was played in lovely sunny conditions on what must be one of the best surfaces in Cape Town.

Bishops started well and forced SACS to defend multiple phases and it was only a matter of time before the dam wall broke. Bishops went wide from a lineout and put right wing Keenan Jacobs in a one-on-one with his opposite number. Jacobs used his swerve and pace to beat his man and score a try in the corner, which centre Cornel Smith converted.

The middle period of the first half was a somewhat scrappy affair. SACS’s execution of their kicking game let them down as did the throwing of both hookers. With both teams struggling to win their set-pieces the game became a stop-start affair although SACS did miss a penalty kick at goal during this period.

Thirty minutes in SACS made what is always a crucial error against Bishops, an aimless uncontested kick. Pinned in the corner five metres from his own line but faced with a ragged kick chase fullback Jesse Wilensky set off of a run upfield. He linked with several players before a few phases later Bishops captain on the day Sam Mitchell barged over from close range. Smit did the necessary and the hosts went in halftime 14-nil to the good.

Early in the second half Bishops extended their lead with what was a soft concession given how hard SACS worked in defence on the day. From a 5-metre scrum they went blind and a simple 8-9 saw left-wing Devon Bruiners put over in the corner. His try went unconverted and at this stage the omens did not look good for SACS.

To their credit SACS rallied and a mauled try scored by flank Kaan van der Walt, which was converted from wide out by flyhalf Jordan Chait lifted their spirits. They created another opportunity soon after only for their wing to drop a difficult pass with the line at his mercy. Following a penalty for offside SACS mauled again but this time released to ball and replacement wing Lecander Salies went over in the corner. Chait missed the crucial conversion but the momentum was with SACS at 19-12 with fifteen minutes to go.

SACS worked their way down field again as Bishops fell foul off the referee. With another maul progressing towards the Bishops line they should probably have kept the ball in and possibly scored or milked another penalty. They chose though to go wide and a spilled pass gave Bishops the opportunity to clear their lines.

Bishops launched wave after wave of attack in the final ten minutes and opened up the SACS defence on several occasions. Two of their five Craven Week players No. 8 Saud Abrahams and centre Justin Heunis were prominent in this period. Were it not for determined scrambling in defence by SACS, for whom outside centre Dominic Sherrell was exceptional on the day, Bishops would have run in a few more tries.

Following a handling error by Bishops with five minutes to go SACS had a scrum five-metres from their own line. SACS conceded a tighthead and Bishops flyhalf Jez McIntyre cantered in to seal the deal with a well taken try, which he converted himself from in front of the poles. This brought an end to what was, particularly in the second half, an exciting game of rugby between two old rivals.

The local derbies in the Southern Suburbs of Cape Town continue next weekend when Bishops travel over the hill to Wynberg to try and avenge their 19-20 first round defeat while SACS again cross Campground Road this time to visit Rondebosch, who will also be looking to reverse their 13-12 defeat to SACS. The long-term forecast is good for next weekend and we should see some more intense derby games between these great schools.