The South Africa College High School (SACS), the oldest school in South Africa, hosted the farmers from Boland Landbou in the first league game of the season. The first team match was played in very hot conditions. SACS led 19-14 at half time but Boland fought back and took the lead with ten minutes to go only for SACS come back and win 26-24 thanks to a brilliant counter-attack try! 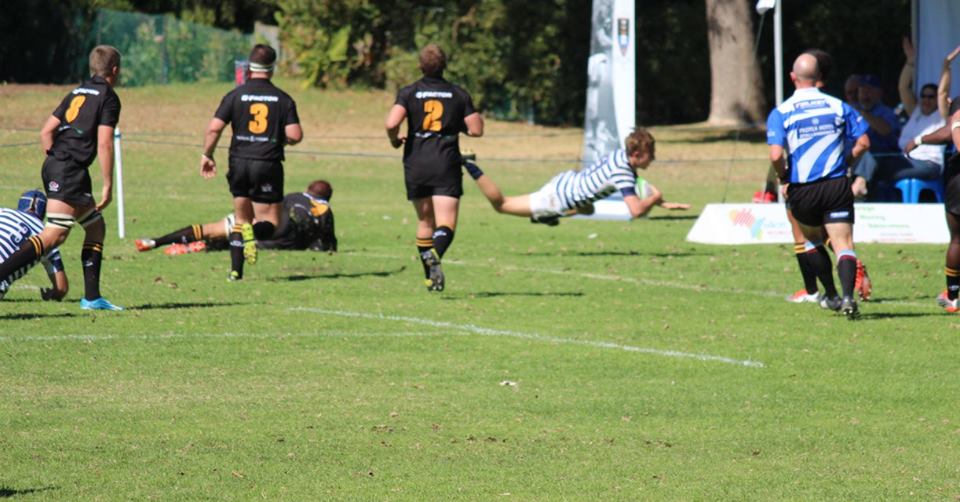 Boland were first on the board after two minutes thanks to a long range penalty from scrumhalf Jondre’ Williams. Boland went straight back onto the attack but a fumble by them was picked up by SACS flank Dylan Hadzigrigoriou. He popped the ball to the backs who spun it wide to right-wing Tumi Mogoje who beat his man and raced clear to score. Flyhalf and captain Jordan Chait converted.

SACS made a mess of the kick-off and then immediately conceded a penalty for offside which Williams duly converted making it 7-6 to SACS after 11 minutes. SACS went onto the attack but were held up short of the Boland line. SACS received a free kick at the ensuing scrum which they tapped and whipped through the hands to the left for wing Thomas Waterkeyn to score.  Chait converted.

SACS never got out of their half again after the kickoff and conceded another penalty which Williams converted. Nineteen minutes in good interplay between No. 8 Halvorsen and hooker Lance Steytler got SACS momentum up the right from a lineout. They moved the ball wide to the left where fullback Athi Gazi beat his opposite number to score. Chait missed and it was 19-9 to the hosts.

Just before half time Jondre’ Williams showed his class first with an intercept that almost led to a try and then with a break which took Boland within striking distance. A few pick-and-go’s from the forwards and burly flanker Johan Lubbe found space up the blindside and burst over to score. Williams missed the conversion as did Chait a penalty attempt soon after.

Straight after the interval Williams drew Boland to within two points as SACS’s discipline at the breakdown again let them down.  The heat meant that the players got tired and sweaty and errors crept into both teams play for the majority of the second half. The score remained at 19-17 for most of the half. Jonde’ Williams again came close to scoring but was again brought down close to the line, as he was after his earlier intercept, by SACS skipper Chait.

With ten minutes left Boland tapped a free kick on the right and swung the ball wide to the left. An offload beat the defence and massive centre JT Potgieter crashed over to give Boland the lead for the first time. A poor kick on attack by SACS was returned by Boland. Athi Gazi got the ball and went back towards touch. He found Mogoje who went outside and whipped the ball back inside to Gazi. Gazi passed inside again to Hadzigrigoriou who passed inside again to lock Tommy Posen. The defence had parted and Posen raced through to score under the poles. Chait converted to put SACS back in the lead.

There was still time and unforgivably SACS again infringed at the breakdown giving Williams a chance to steal the win with another 53 metre penalty like the one he kicked earlier. This time he wasn’t on target though and SACS held on for a memorable win.