Rondebosch Boys’ High School kept their 2017 unbeaten run in the Southern Suburbs of Cape Town intact with a crushing defeat of the South African College High School (SACS). Playing at SACS, Rondebosch dominated from start to finish, in the process racking up a comfortable 36-22 (half time 22-3) win.

It was meant to be a tight derby contest but Rondebosch never read the script and were out the blocks in a flash. Before SACS had woken up they were 15-nil down and it was virtually game over. Rondebosch commanded field position and possession to telling effect in the first fifteen minutes.  They ran onto the ball at pace winning the all important gain-line battle with relative ease. First they turned SACS over as they executed an exit play for centre DJ Falconer to score, and then expertly used their structure across the width of the field to set up fullback Ross Roode for a beautiful try in the corner. Flyhalf Ross Stone converted the first try and a penalty to put the visitors well clear.

SACS converted a penalty soon after through fullback Michael Abrahams but Bosch were intent on extending their lead in bigger multiples. After eighteen minutes good build up play down the right was rewarded when No. 8 Cal Smid bust through some feeble SACS defence and offloaded to marauding loose-head prop Seth Christian who scored under the poles.

SACS dominated possession and territory in the latter stages of the half but were too lateral on attack and made far too many handling errors. The Rondebosch defence must also be commended, as even when reduced to fourteen men for a period, they were determined and physical and never allowed SACS to cross their tryline.

SACS started the second half well and got in behind the Rondebosch defence but once again nothing came of it. Once Rondebosch got down the other end of the field they struck again. Christian was again involved with an offload onto the foot of Falconer who reached out and scored his second try of the game. Stone converted and SACS were merely playing for pride at 29-3 down with just under half an hour to play.

Five minutes later SACS got their first five pointer when flyhalf David Hayes chipped over the Rondebosch defence for wing Aaron Zeederberg to score.  Abrahams missed the easy conversion.  SACS looked to have scored again soon after when right-wing Kabelo Mokoena, who had an excellent second half, broke out from inside his own half. Brilliant scramble defence by Rondebosch saw them get back and hold flank Declan O’Connor up over the line.

On twenty-three minutes loose-head prop Seth Christian capped a hugely memorable performance with a touch of genius. Gathering the ball on the halfway line he chipped the ball over the SACS backline, re-gathered and offloaded. He steamed onto the ball on the next phase to make another telling intrusion and open the hole for his captain and scrumhalf Robbie Davis to snipe though and offload to hooker Matt Ginsberg who scored to make it 36-8.

SACS scored two consolation tries in the final ten minutes via Zeederberg again and centre Chad van der Loo but it was too little to late as they were forced to endure a second disappointing derby defeat at home in a row.

The Rondebosch schoolboys swarmed onto the field to congratulate their heroes when referee Jonathan Kaplan blew the final whistle. Rondebosch showed what they are truly capable of with a compelling performance, which perfectly sets up next weekend’s final derby match of the season against Bishops.

SACS have to do some deep introspection and lift themselves for a trip over the hill to Wynberg Boys’ High who will be licking their lips at the prospect of beating their archrivals and ending their season on a high! 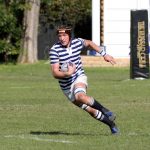