In a ding-dong battle not dissimilar to the 1stXV encounter which was to follow the Boland Landbou U16A team pipped SACS by one point to win 29-28.

SACS held a slightly fortuitous 7-3 lead at half-tim thanks to a tenth minute try by Robin Aspeling. An overthrown line near the Boland line was collected by Aspeling who beat the Boland defence to score. Matthew Venier converted. Boland struck back ten minutes later with a penalty following a high tackle.

The second half was all action though as SACS scored three tries and Boland four. Boland struck first after three minutes with a brilliant set-piece try. Good inter-play between flyhalf and inside centre saw them put their No. 8 into space. He carved through to score and give the visitors the lead for the first time.

SACS struck back almost immediately from turnover ball with wing Cameron Abegglen finishing expertly. Venier did the necessary and SACS were back into a 14-10 lead.

Boland scored again five minutes later thanks to a well worked penalty move only for SACS to charge down their exit kick from the ensuing kick-off receipt and again take the lead 21-17.

Boland then took the game away from SACS with two tries at the start of the final quarter of the game. The first came from a planned lineout move and the second was a good team try well finished by their left wing.

With ten minutes left SACS were trailing 29-21 and they threw the kitchen sink at Boland. SACS were held up over the line twice before eventually flyhalf Rafa Mosothoane broke through to score. Venier converted but it was too late and Boland held on for a narrow one-point win.

The B-team match was also a humdinger. SACS took a 31-10 lead after 40 minutes but ran out of steam and Boland kicked a last minute penalty to win 32-31.

A disappointing result obviously but a very positive result in the context of the U16 division as it provides proof that we are creating player depth and spirit by training together more closely. 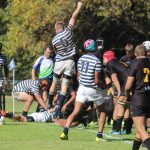