10a match report against RBPS

We were very well prepared to face our opposition of the day, Rondebosch, as in the first term they had convincingly beaten us and dominated play.  It was a beautiful sunny day as the U10A ran onto the field.  We loss the toss and were playing up the field, kicking in the first half.  Our defence was poor to start off with, and we conceded a try in the first five minutes of the game.  Through a positive team talk, we responded with fire and controlled the ball to equalise, scoring just opposite the poles.  By half time we were in the lead.  We continued to dominate play in the second half and scored a few more tries.  We showed great courage in our tackling against a strong team.  The match ended 19 – 7 to us, a result we are very proud of.  Well done team! 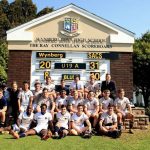