14A match report against Stellenberg

The u14A team came up against a good Stellenberg outfit on Saturday in a match they desperately wanted to win. Their opposition had enjoyed some excellent results during their season and would provide balanced forward play with speed out wide. It was imperative we cut down their forward strike runners as well as their elusive outside backs if we wanted to win. To a large extent this was achieved and if the ball had bounced differently and a couple of small things had gone our way we would have been celebrating a hard earned win. In fact Stellenberg might very well be able to argue the same and in the end a draw was probably a fair reflection on the balance of proceedings.

Stellenberg started very well and after a period of concerted pressure where we defended bravely they were able to convert their initial dominance into points through their goal-kicker. We came back into the game through hard work from our pack and some good, hard running lines from our backs. Matthew Venier was able to tie the game up at 3 – 3. The see-saw bout continued and both teams’ defence was admirable on the day with no player from either side shirking their defensive responsibilities. Ultimately through another forward foray we took the lead through another well taken Venier penalty. At half time we led 6 – 3.

The second half was a ding-dong battle with neither side holding the ascendency for lengthy periods. Ultimately Stellenberg were able to tie up the game at 6 – 6 twelve minutes from the end. Both teams attacked frantically in the last ten minutes in order to try and win the game with neither side wanting to settle for a draw. However a couple of handling errors from both teams at crucial times ensured that this was the final result.

The team was come on superbly in terms of their defensive commitment and work off the ball and, while we have not been able to celebrate a win in the third term, I have no doubt that the hard work they are putting in at training will bear fruit in the fixtures to come. 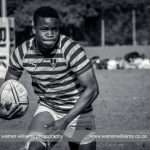