SACS HANG ON FOR WIN AGAINST STELLENBERG

The South African College High School (SACS) travelled up the N1 for the second week in a row, this time not as far, just to Durbanville to face Stellenberg. The task at hand though was equally as daunting as the previous week against Paarl Boishaai but for different reasons. SACS trailed 10-3 at halftime but managed to win a very tight match 18-13.

Stellenberg are a very good team and in fact a very good rugby school. They are emerging and one could argue have already emerged as a major force in Western Province Schools Rugby. Their 1stXV had only lost one match this season before Saturday and that was to Outeniqua. They were primed and ready for SACS and it took everything SACS had to eventually subdue them. 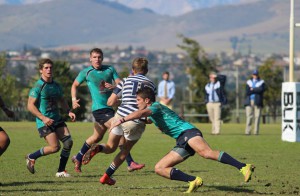 Stellenberg started well and took a 3-nil lead after two minutes thanks to centre Schalk Carstens. SACS were struggling to get out of their half as a fired up home team got stuck into them. Eventually hooked Liam Larkan broke out and SACS should have scored but the chance wasn’t finished.

Stellenberg held the upper hand for most of the half the half though, their captain Matthew Boshoff carrying well ably assisted by his tireless pack of forwards. Flyhalf Evert Carstens controlled proceedings well with his boot. The pressure eventually told when after a prolonged period of phase play centre Francois du Plessis beat his man to score a lovely team try. Carstens converted and it was 10-nil after 25 minutes. 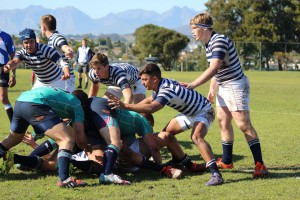 A flair-up occurred around the half hour mark which saw a SACS player yellow-carded but strangely SACS receive the penalty, which flyhalf Jordan Chait converted. Carstens missed one soon after and the teams took a rest from the action at 10-3 to the hosts.

Stellenberg continued with their territory based game plan after the break and SACS began to counter-attack well, ironically though it was dominant scrum that saw them score. SACS pushed Stellenberg off their own ball five-metres from line and after No. 8 Alex Halvorsen had a go at the line before flank Dylan Hadzigrigoriou picked the ball up and dived over. Chait missed the conversion but kicked a penalty fifteen minutes into the half to see SACS take the lead for the first time.

Stellenberg came back at SACS and delivered a great scrum themselves from which they launched an attack. SACS were penalised for hands in the ruck and Carstens put the hosts back in the lead with eight minutes to go. 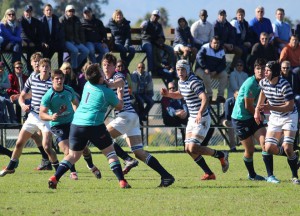 SACS had to summon all their will power to win this one! First they got down into Stellenberg’s half and scored through prop Sihle Lonzi and then had to go back and hold off a rampant Stellenberg team for the final three minutes of the match. SACS produced some great defence at the death to keep out a desperate Stellenberg team. It was a fitting end to what was a true test of character for both teams. 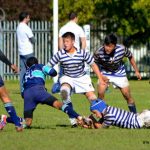